(Zoom out for a view of Zamami in relation to Naha, Okinawa Island, Japan, and the rest of the world)

Zamami Village is an island village located in Okinawa Prefecture.  Zamami is a 40km hour-long high-speed ferry ride from Okinawa’s capitol and main city Naha.  Close enough even for a day trip but worlds apart, Zamami Village is the perfect weekend island getaway.

Recently designated a national park (the Kerama Shoto National Park) and recognized as a “Wetland of International Importance” by the Ramsar Convention, Zamami Village is a world-famous destination.  Even since as early as the 1970s, the coral-filled waters around Zamami have been known worldwide as a diving “mecca.”  In recent years, activities on top of the water and on land have taken off as well.  Some notable examples include the hawaiian-born sport of standup paddleboard, sea kayaking, GT fishing, sailing, hiking, and Nordic walking.  The winter is whale watching, as humpback whales make their way from northern waters to Zamami to breed and raise their young. 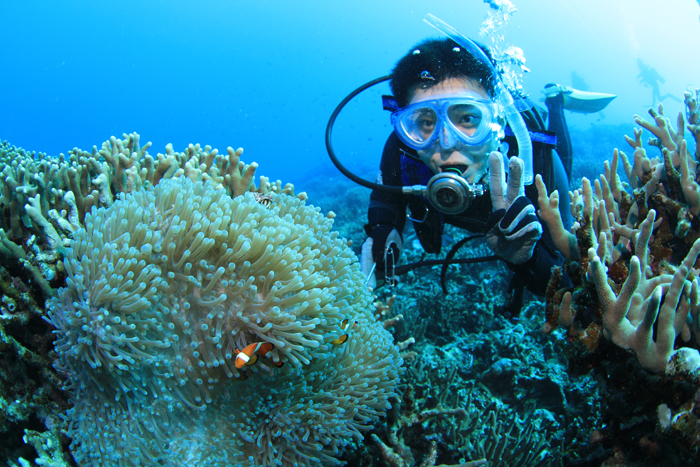 The mayor getting his dive game on.

As a municipality, Zamami Village is comprised of over 20 islands, of which only three are inhabited.  Zamami Island is the largest both in land area and population with around 600 residents.  A stone’s throw away is Aka Island and its 200 or so inhabitants.  Finally, Geruma Island (connected to Aka by a bridge) is the home of around 60 villagers.  Just to the south of Geruma and connected by yet another bridge is Fukaji Island and the Kerama Airport.  Chartered helicopters often make use of the airport. 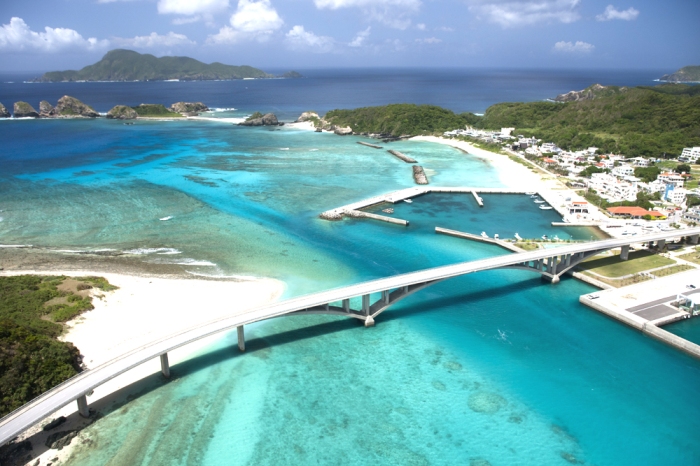 The bridge connecting Aka and Geruma islands.

Zamami is surrounded by coral reefs lending to an abundance of sea life and beautiful white sand beaches.  The main beach, Furuzamami, is a Michelin Guide Japan 2-star destination.  Furuzamami Beach has coral immediately upon entering water and is an amazing spot for snorkeling right from the beach. 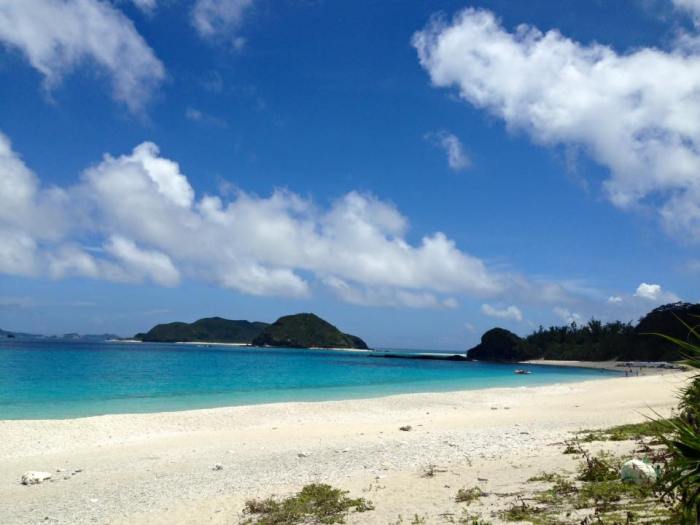 Ama Beach, next to the Ama Hamlet and Ama Beach Campground, has amazing views.  Although Ama’s coral is a little bit further out than the coral at Furuzamami, Ama is frequented by sea turtles grazing the growth at the bottom of the water.  Especially during high tide, the sea turtles swim right up to the shallowest parts of Ama Beach allowing visitors to swim along with them.  The Ama Campground is located on the beach and by far the most inexpensive lodging option for those bringing their own equipment at 300 yen per person per night. 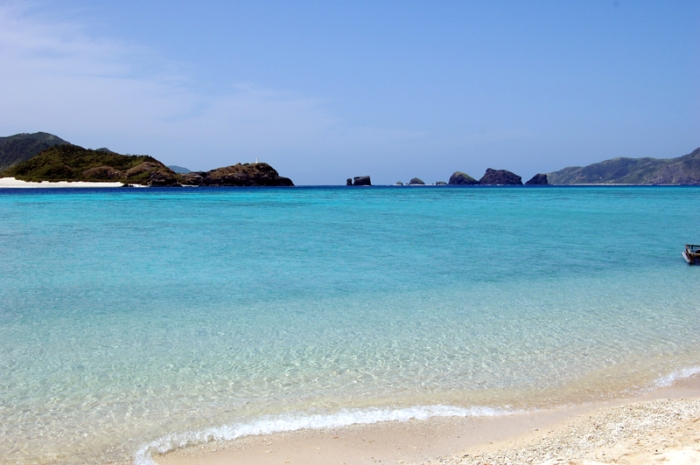 One view from Ama Beach. Uninhabited islands and rocks dot the horizon.

All 3 of Zamami’s inhabited islands have plenty of lodging options and diving services, often combined in one place.  On top of diving, there are boat-snorkeling tours, sea kayaking and standup paddleboard tour operators, restaurants, cafes, bars, izakaya, and more. 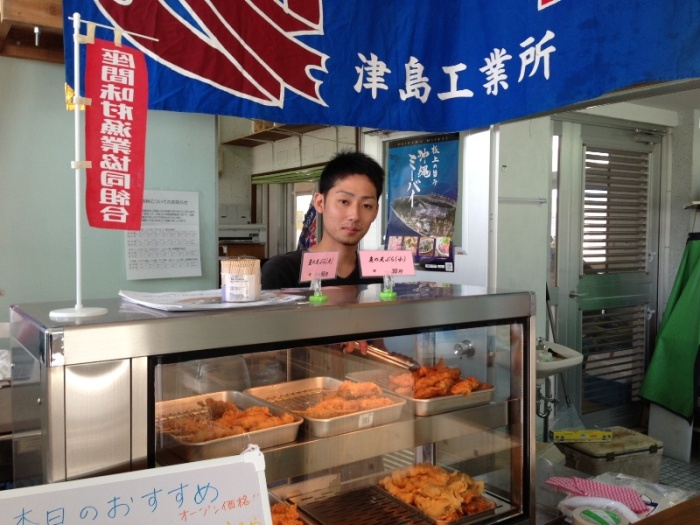 Getting to and getting around the islands is a cinch.  During the peak summer months, the high-speed Queen Zamami often makes three trips a day from Naha to Zamami-Aka and back.  In addition to the high-speed Queen is the larger “Ferry Zamami,” which, in addition to people, transports food, vehicles, and any other type of supplies to Zamami Village. 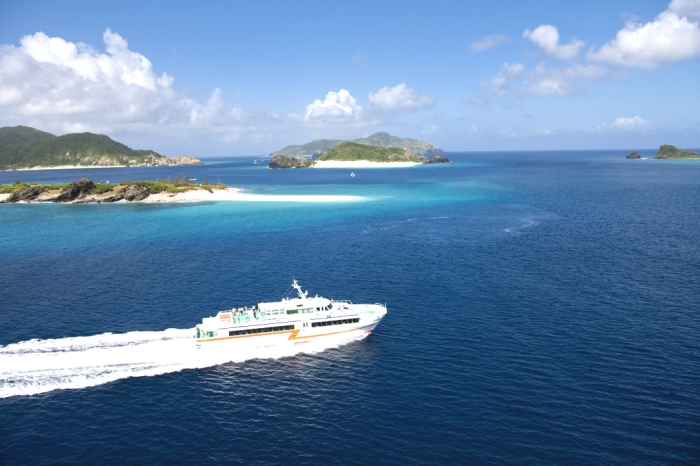 The high-speed ferry Queen Zamami III is currently in it’s third iteration. It only takes 50 minutes from Naha to Zamami via the Queen. 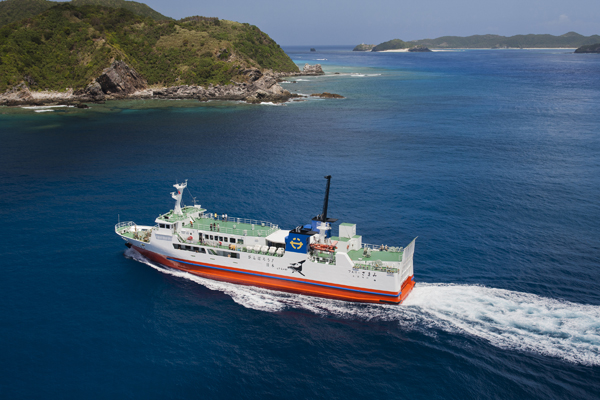 The larger Ferry Zamami transports all of the villages supplies in addition to passengers.

Within Zamami Village, to get between Zamami and Aka-Geruma islands, villagers and visitors take the inter-island Mitsushima ferry.  All of the islands have bicycle and scooter rentals and a taxi.  Additionally, many of the accommodations and rental services also run shuttles to the main beaches.  As the largest of the three islands, Zamami Island also has a village-run bus and car rentals.

So hop on the next boat for paradise today!  You’re in for a wonderful time, and Zamami Tourist Information is here to help plan your way. 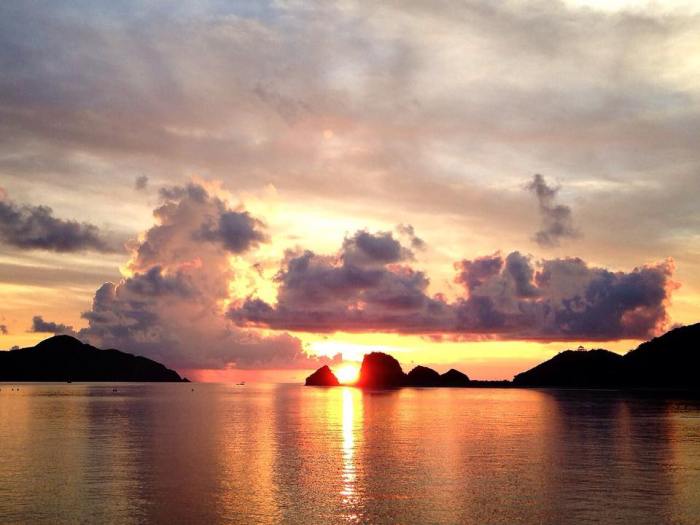