After arriving in Zamami Village, there are a few methods of transportation.

First, many hotels offer to pick their customers up at the port.  Check with your directly with your hotel.

There is a village-run bus.  The bus has two routes: Ama-Campground route to the west and the Furuzamami-Asa route to the east.  The bus costs 300 yen per person and takes about 5 minutes to get to the beach.  Pick up a schedule in the Information Center in the port.  The bus departs from the port.

There are no taxis in Zamami Village. 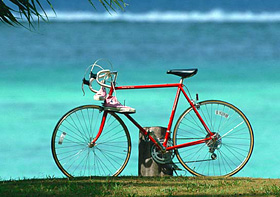 There are multiple places to rent bicycles on Zamami and Aka islands.  Zamami is quite mountainous and it would be difficult to try to go around the entire island by foot or bicycle.  The road to Ama Beach and the Kaminohama Observatory is relatively flat and the best route for bicycling.  Stop by the Information Center for bike rental shops.

Aka is also just as hilly as Zamami.  The best route for cycling on Aka-Geruma is the road from Aka to the Geruma Hamlet.  There are great views from the bridge.

For those who would like to go around the entire island, we recommend renting either a scooter or car.  There are multiple rental shops with motorized vehicles.  Cars generally cost around 3600 yen for two hours, and scooters cost around 2500 yen for three hours.

Depending on the country in which your driver’s license was issued, an International Driving Permit may be required for renting any type of motorized vehicle.  For those in the USA, you can pick one up at AAA for around $15.  Be sure to check whether or not you will be able to drive in Japan with the license of your home country or not, before coming to Japan.

There are no car rentals on Aka Island.  However, there are scooter rentals.

There are no tours that go around the entire island.  The laws regarding buses on small islands in Japan are very complicated.