The ferries to Zamami Village depart from Tomari Port in the center of Naha.  There are a couple ways to get to Tomari.

The Yui Rail Monorail in Naha City. Photo by Hugues Mitton obtained via this Wikipedia page.

The first method is the Yui Rail monorail.  The monorail starts at Naha Airport and runs through the primary tourist areas of Naha City before ending at Shuri Castle.  The closest station to Tomari Port is Miebashi Station.  It takes about 10 minutes to walk from Miebashi Station to the Tomari Port Terminal.  The fare to Miebashi from Naha Airport is 300 yen.  The monorail may be cheaper than taking a taxi but requires a little bit of walking.  The monorail is recommended during rush hour as Naha’s streets become rather congested due to traffic.

The walk from Miebashi to Tomari is quite simple and involves only two roads and one turn.  Exit the ticket gate and turn left.  Head down the winding staircase on the left.  At the bottom of the staircase turn left and follow the road.  Do not follow the road that runs parallel to the monorail.  Follow the road that runs perpendicular to the monorail and station.  After about 200 meters, you will arrive at Route 58–a large divided road with multiple lanes.  The Richmond Hotel should be on your left.  Turn right and head down 58.  The Tomari Terminal is a huge building about 400 meters down the road on the left side.  The Zamami Ticket Office is on the first floor of that building. 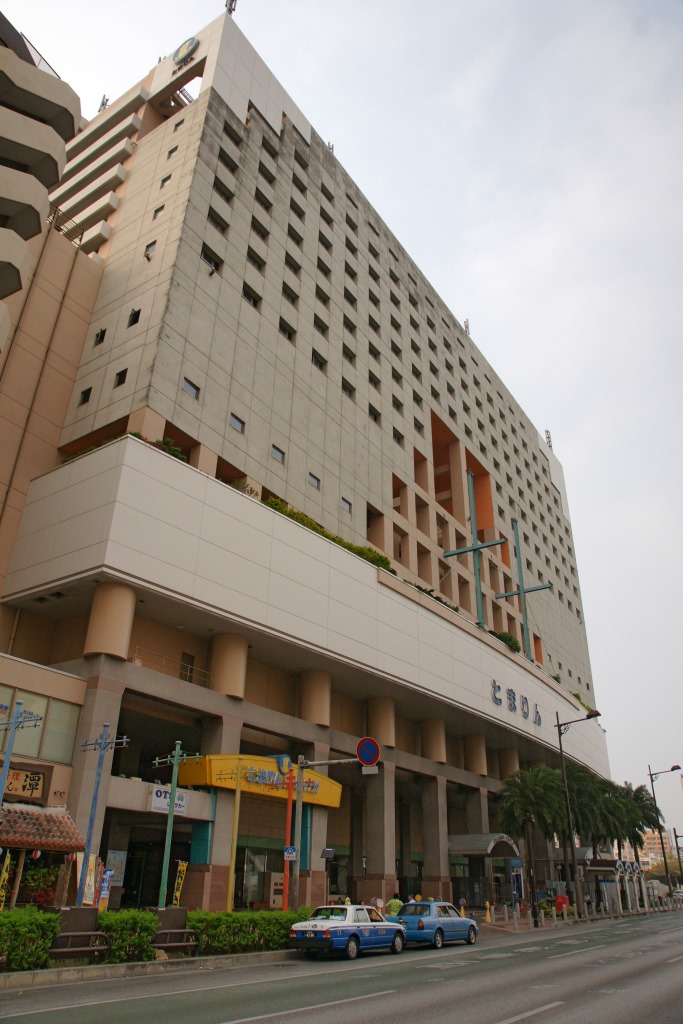 The huge Tomari Port Terminal building. The upper floors are a hotel.  Image taken from the following Tomari Image Wikipedia.

It never hurts to ask the station attendant how to get to Tomari either.  There’s a big map upon exiting the ticket gate.

A taxi ride from Naha Aiport to Tomari Port costs around 1200 yen and takes maybe 10 minutes.  Tell the driver to take you to Tomari.  If you plan on boarding the Queen Zamami, you can tell him to take you directly to “Tomari hokugan.”  There is a small ticket window where the Queen departs on the hokugan north side of Tomari Port.

Note: Naha is a crowded city and there is often a lot of traffic, especially during rush hour.  Aside from the monorail, there are no trains and everyone drives, so the streets become quite congested.  Make sure you leave enough time to get to the port before the ferry departs.